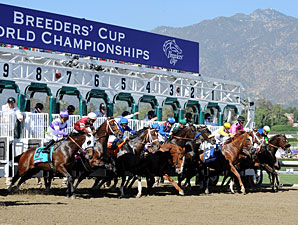 Breeders’ Cup reported that a total of nearly $144.3 million was wagered on the two-day World Championships Nov. 2-3 at Santa Anita Park, down from the $161.5 million figure a year ago when the event was hosted by Churchill Downs.

Posted via email from Michael Pizzolla On ValueCapping™, Horse Racing, And Technology

Posted on November 4, 2012 in Uncategorized by Michael Pizzolla